Situated in the Sola Santej Road, the Science City, put forward all-embracing didactic and recreational opportunities to the tourists. The science city is a government venture to showcase the over all development of the state to the outsiders. Set up in the year 1960, this great concern had received laurels both from the general public and the ace educationalists. IMAX 3D Theatre in the science city is a unique experience and it is the hot favourite among children. 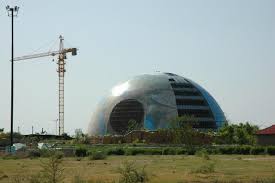 Musical Dancing Fountain Aquamobil, ride simulations are the other attractions in the park. One can also go to the Energy Education Park, which is spread over an expanse of 9000 square meters. Another important wing of the park is the Life Science Park where large verities of butterflies and so many rare cacti plants are preserved.