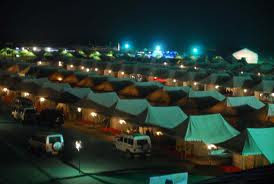 The Kutch Mahotsav aptly called the 'Mahotsav' (great festival) is a guided tour of the life and times of Kutch, its beauty, nostalgia, ethos, traditions, culture and spirit. Kutch Mahotsav is usually organized during February and March each year. The festival organized by the Tourism Corporation of Gujarat, is a six-day tour into the heartlands of Kutch.

The tour includes a visit to Bhuj at the heart of Kutch, Mata no Madh, an old temple dedicated to the mother goddess believed to be 1200 years old. Lakhpat, a deserted port transports you to a time when it was once the hub of Gujarat's flourishing sea trade. The Mahotsav also takes you to Narayan Sarovar, one of the most sacred pilgrimage sites for orthodox Hindus, Koteshwar and Bhadreshwar, also important pilgrimage centres along the Mahotsav circuit.

Anjar, the beaches of Mandvi, Dhola Vira's archaeological ruins and the rural fair at Dhrang completes a rich insight into Kutch, its colourful people, historic towns and remarkable handicrafts.

Journey Into History
The Kachchh Utsav is a guided tour of the life and times of Kachchh- its beauty, its nostalgia, its ethos, its traditions, its history, its culture, its very inner self.

The Tourism Corporation of Gujarat, Ltd. (TCGL), organised this unusual tour of Kachchh, in response to the request of many who wished to visit an area quite different from urban India. This tour was called a Mahotsava, or great festival, because of the great variety of sights and scenes that are offered to visitors. The Mahotsava consists of a six-day tour of Kachchh, in which all requirements of the visitors are taken care of. 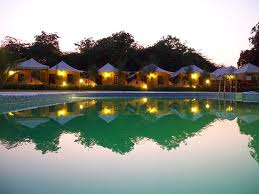 Bhuj Attractions
Bhuj lies at the heart of Kachchh and is linked by many roads to the rest of the peninsula. Also in Bhuj are the Aina Mahal or Glass Palace, which was built in the 18th century, the Kachchh Museum - which is Gujarat's oldest, and the Bharatiya Sanskruti Darshan complex, which holds some remarkable frescoes depicting the RAM-LILA. The rural bazaars of Bhuj sell its exquisite handicrafts.

Mata No Madh
Mata no Madh is an old temple believed to be 1,200 years old. It is dedicated to the Mother Goddess. The temple has many unusual features and its treatment of dimensions and of space is unique.

Lakhpat
Lakhpat, once a flourishing post, and now deserted, reminds one that in ancient times, ships sailed to West Asia from Gujarat's West Coast, Time stands still at Lakhpat, recalling to mind a era long past, through the many sites in the city, including the Sikh Gurdwara, and the 200-year tomb or Dargah of Ghaus Mohammed Kaba.

Narayan Sarovar
Narayan Sarovar means the Lake of Narayan, a name of Vishnu. There are actually five sacred lakes here. A temple complex is located on one of these. Narayan Sarovar is one of the most sacred pilgrimage sites for orthodox Hindus. The architecture is ancient and awe-inspiring. Koteshwar, another place on the Mahotsava route, is also a site which pilgrims invariably visit.

Bhadreshwar Temple
Bhadreshwar is not only considered an important religious site by the Jain community, but it also has shrines, mosques and temples, as well as unique an ancient step-well.

Anjar
Anjar, near Gandhidam, is famous for the Samadhi of Jesal Toral, the Ajaypal Temple, and the shrine of Pinjora Pir. The bungalow of James Macmurdo contains remarkable examples of the art of Kachchh.

Mandvi
Mandvi in southern Kachchh, is a renowned holiday centre with a beach overlooking the Arabian Sea. The Vijay Vilas Palace evokes the royal splendour of the past. Mandvi's Hawa Mahal is also imposing, and reminiscent of similar palaces in Rajasthan. Banni and Khavda are villages set like jewels in an expanse of desert. In these villages live some of the most talented craftsmen of Kachchh who practise their traditional skills, to produce artistic masterpieces.

Dhola Veera
Dhola Veera was once an important part of the Harappan Civilisation, proving that the Harappan culture extened to Gujarat. Excavations are still in progress.

Dhrang
Dhrang is another location famous for its rural fair ad for the handicrafts, traditional objects, hand-printed and embroidered fabrics made and sold there. It is also famous for the jewelley available there.

Excursions :
The Kachchh Mahotsava is usually organised during February and March each year. Other places of interest nearby are Rajkot, in Saurashtra (16-km from Bhuj), Jamnagar (189-km from Bhuj) Junagadh (260-km from Bhuj).

Getting There
Bhuj has an airport with flights to different destinations. Buses can carry visitors to Ahmedabad or anywhere else, en route.
Posted by LINESH PATEL at 9:30 AM No comments:

Participants also have a chance to see Kachchhi's many attraction like the palaces, museum and royal cenotaphs of Bhuj, the beaches and palaces of Mandvi, the holy lake of Narayan Sarovar, the craft villages of Banni, during tours offered by TCGL. The festival usually coincides with Shivratri, a day with a new moon night dedicated to Lord Shiva, celebrated in Shiva temples of the Kachchhi district.

Surrounded by the sea and desert on all sides, the Kachchhi district is one of India's most vibrant regions. With palaces, forts, colourful villages, enchanting townships, beaches, bird rich marshes, rural lifestyles and beautiful handicrafts, it is a potential paradise for the tourist.

Plenty of colourful dancing, music concerts, 'Sindhi bhajan' performances, 'Langa' desert music, folk arts and craft demonstrations, ballads and other ethnic shows are some of the many highlights of this festival. Stalls sell embroideries, jewellery, woodcarvings and other regional handicrafts.
Posted by LINESH PATEL at 8:34 AM No comments: